The Basics of Slate Roofing Maintenance

Slate Tile Roofing is a time honoured trade and one requiring a very unique skill set. It is highly recommended that slate roofs never be walked on by any other than licensed professional slaters. Unless one intimately understands a slate roof, walking upon them can cause slate cracking and breakages leading to roof leaks. 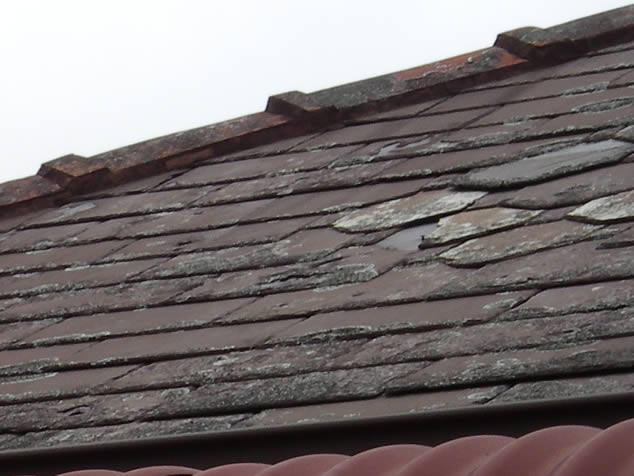 If correctly maintained, slate tile roofs last far longer than any other roof, so much so that as long as they are correctly roofed initially and are not walked on by anyone other than a qualified slate tile roofer, they are also the most inexpensive roof one can purchase.

A further point in favour of the slate tile roof is that they also add value and prestige to any house due to their longevity and elegance.

Most broken slate tiles and leaks on a slate roof are not due to general wear and tear but are instead due to incorrect installation in the first place or people of other trade types or backgrounds walking upon it.

In short, to protect your slate roof and to ensure you get the best out of it, keep people from walking on it and make sure your slate tile roof installer is fully qualified and licensed. Keeping this in mind, please find below a few basic datums on slate roof tile maintenance. 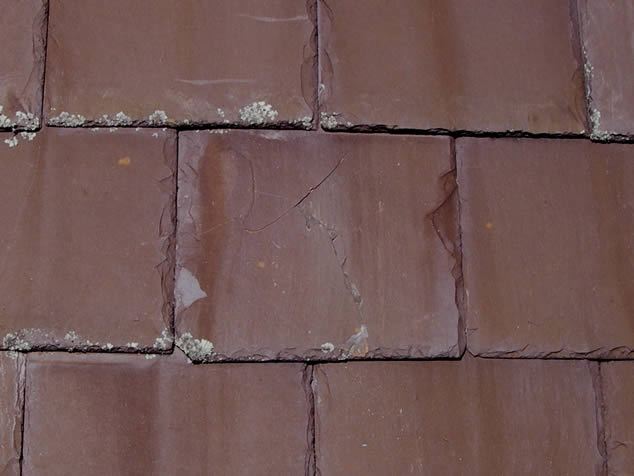 You can see in the second shot that removing the roof slate exposes a batten. This allows us to nail a copper strap into the batten which will hold the replacement roof slate in position. At Ranger Roofing we only recommend and use copper straps for all our repairs. Lead straps are not recommended because they are mostly too thin and malleable and as such tires under the weight of the replacement roof slate. Eventually that roof slate unfastens and slips out making the repair redundant. 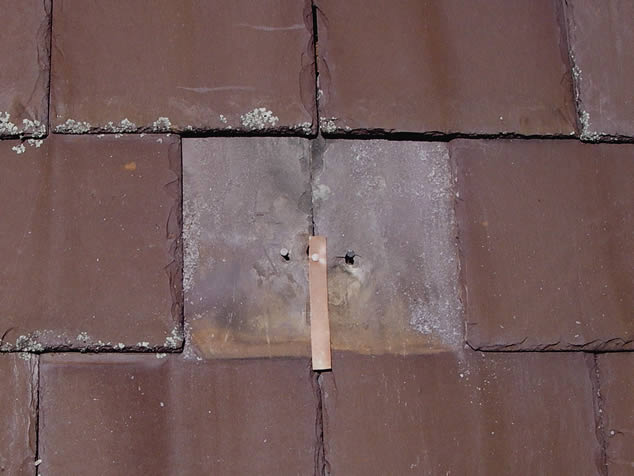 In the fineal shot, one can see a successfully replaced roof slate by use of the copper strap. Within weeks the copper dulls and blends in with the rest of the roof. 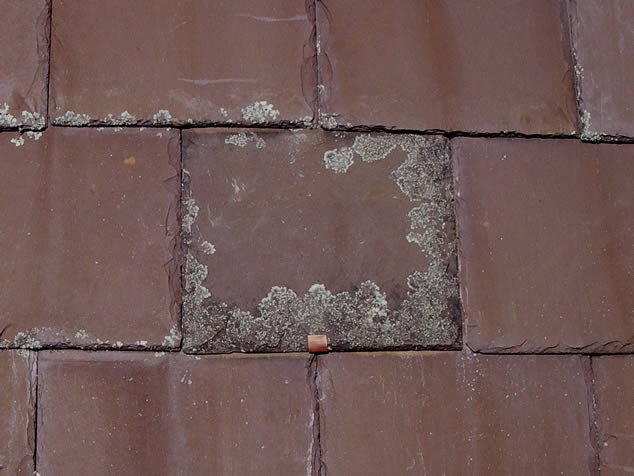 Valley Repairs On A Slate Roof

Replacing valleys are quite a common requirement in the maintenance of a slate roof. This is due to valleys wearing out faster than the remainder of a slate roof. A gal, zincalume or infact colorbond valley may for example last anywhere from 30 to maybe 60 years whereas the rest of the slate tile roof can last twice that long or longer especially if copper clouts are used in nailing the slate tile roof.

Here is an example of a valley on a slate tile roof in Sydney which has been in need of replacement for some time. 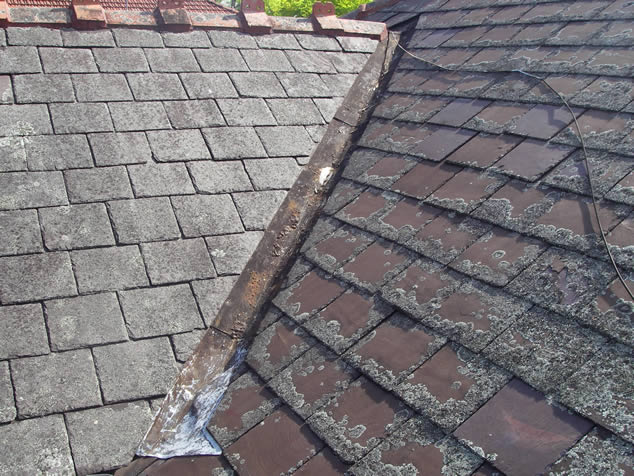 In order to go about replacing the valley, ridge capping is removed and the slate tiles are taken out along one side. This done, one then takes out any nails holding the old valley in and then slides it out sideways. 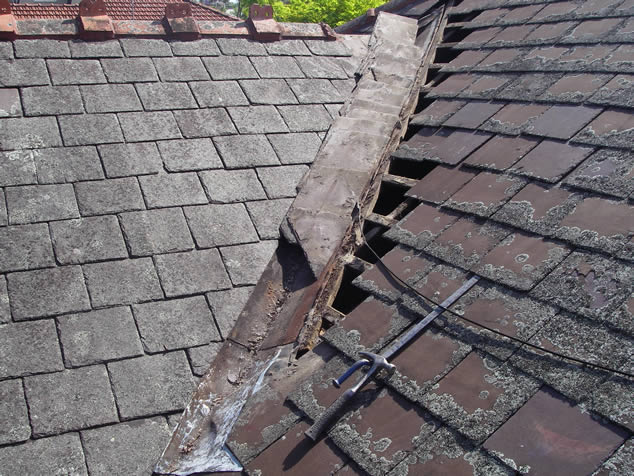 Valley replacement can be complicated by incorrectly installing the valley initially which unfortunately is not altogether uncommon.

As you can see here, once the new valley has been slid into place, one then reslates the unslated side. Finally the ridge capping is rebedded and repointed. 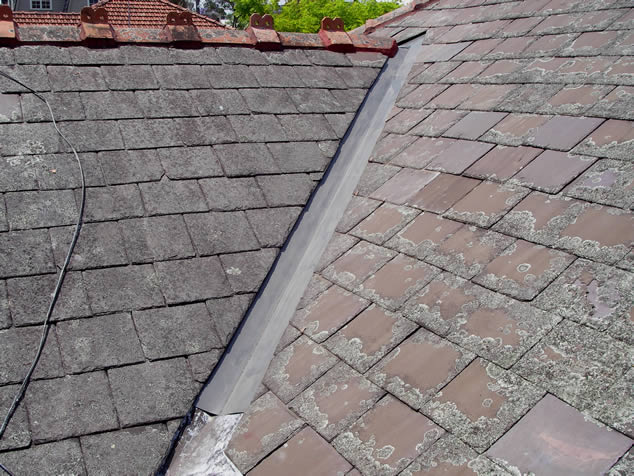 In maintaining slate roofs one often comes across ridge tiles where the bedding and pointing is crumbling and needs attention. Bedding consists of a mixture of sand and cement on which a ridge tile is fixed upon. Pointing is the material one then applies to the sides and collars of a ridge tile usually consisting of a colour dye. This colour is traditionally red, however, terra cotta orange is also popular amongst many other available colours. Ranger Roofing uses a premixed pointing material which has some elasticity in it diminishing the chances of cracks appearing and increasing the longevity of overall product. 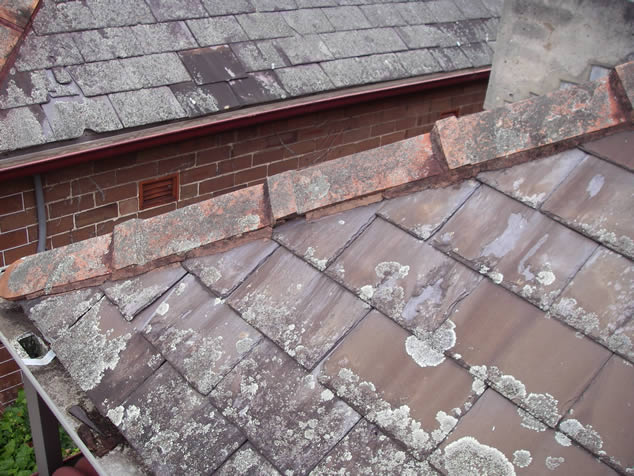 Note the cracked bedding/pointing and also that some has completely fallen out. 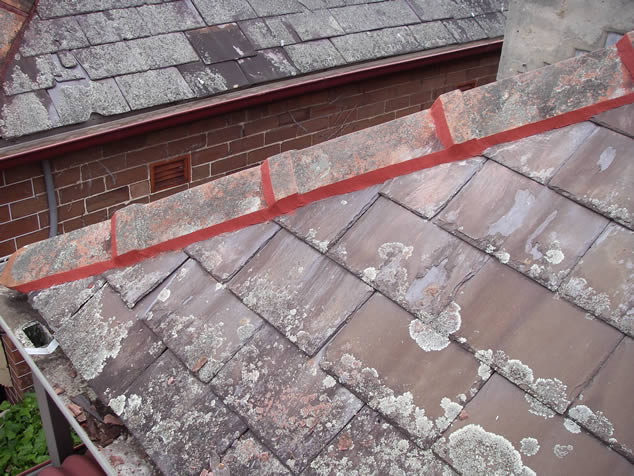 After repointing the ridge capping has been completed. Note not only the improved integrity of the roof but also the aesthetic lift a repoint brings to a slate tile roof.